The last few days have been a wonderful whirlwind of reunions and catching up with Irish (and Manx!) friends who have worked in Mozambique. Red wine flowed, a lot of good food was consumed, and more words than it deserves were wasted on the mess that is Mozambique today.

It was wonderful to catch up with friends, some of whom I hadn’t been able to see for many years, and some of whom left when things were still hopeful and positive and we thought we were helping Mozambique build itself anew. It was a pretty intense week, but great to see everyone.

First of all we had a lovely relaxed weekend with my former boss down in Carlow and his wonderful wife and their amazingly all-grown-up kids. I kept wanting to come over all grandmotherly and say things like ‘wow haven’t you grown’. Instead we debated the pros and cons of Thailand as a holiday destination for 18-year olds, discussed university courses, and went to see the Paddington movie where the girls ate their bodyweight in pic and mix. Lauren had a wonderful time bonding with the ever-friendly Fletcher the dog, who had travelled all the way from Maputo with them when they left.

We also had a lovely night in Dublin catching up with Claire, Sive and Denise, as well as Claire’s daughter whom I hadn’t seen since she was Lauren’s age. She is now a fully-grown, articulate and lovely teenager.

We spent a wonderful day with Nicole and Thomas, who many of my Mozambique friends know; they are doing very well and Thomas is a delight. Nicole took us to the National Gallery – although we mainly ate cake and went to the shop rather than appreciating much of the art – then we enjoyed a tour of the Christmas lights and admired the Christmas tree in Grafton Street, before retiring to Andersons for supper and (yet more) red wine.

We also had lunch with Ruairi ‘the gaffer’ De Burca (so named by the guy on reception), back from Belfast to take on the no-less-challenging vagaries of Irish Aid.

More than anything, though, we got to spent some quality time with the lovely Denise, a true friend, wonderful host and much loved pseudo-aunt for Lauren. We usurped her room, abused her heating, made ample use of her washing machine, messed up her kitchen, flooded her bathroom, and she still got up before dawn to drive us to the airport.

Maybe she just wanted to make sure we made.that.plane!!!!

After a lovely night in Dublin catching up with friends, and a horrific morning battling the Christmas shopping crowds on O’Connell street, we jumped on a train down to this beautiful corner of the country, the Beara Peninsular. Its about as far away from Dublin as you can get and still be in Ireland.

Our friends, R and I, split their time between Ireland and Mozambique, and while we were with them they treated us to some wonderful home cooked food, lots of red wine, and some lovely walks. After the last few weeks of constant travel it was wonderful to be in a homely environment and we made full use of the facilities, doing 2 loads of washing, eating and drinking well and generally enjoying the home comforts. Thanks guys.

The weather was stunning for this time of year – cold but sunny for the main part – and it was great to be able to get out into the countryside. 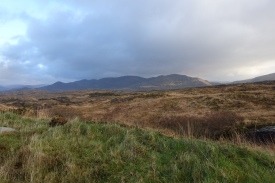 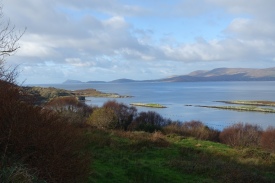 A highlight of our trip was when the resident badger came to visit. He is apparently a regular visitor, and we left two mackerels out on the lawn for him. Around 8.30pm he turned up and proceeded to tear apart the fish, right in front of the patio doors, for a good ten minutes. It was an amazing sighting, and he was a big boy alright. Lauren and R led on their bellies on the floor, less than a metre from him, while he tucked in. I’ve never seen a badger that close and for that long, and it was a real privilege.

One night, Lauren stayed in with I, while R took me out to the nearest town to a comedy show. I wasn’t quite sure what to expect from a comedy show in this tiny town. All R said was it was three female Irish comedians who had been going for ages.  To be honest, even having sat through the show I can’t quite describe it. The Nualas are three bonkers women in Spanx, sparkly (very short) dresses and ‘torture shoes’ who have penned funny songs about all sorts of things from obsessions with plastic surgery to breakups to foreigners’ perceptions of Ireland. Just google them, they don’t fit neatly into any particular box and have a style all their own.

It’s fair to say it was a firmly female audience, with a divorce party down in the front row livening things up and thankfully drawing most of the ‘audience engagement’ fire. One of the songs was ‘Jesus, Mary and Joseph why am I so fat?’ and another was ‘Family’ – mainly about all the things they’d like to do to the various in-laws, distant cousins and uncle Dave the paedophile.

It was very funny, in a sweary, shameless, self-mocking, Irish kind of way, and certainly went down well with the audience of mainly middle aged and above local women and the few men who’d been dragged along. It was definitely a good craic, although it’s fair to say I only got about 80% of the very Irish jokes. I was terrified I’d get picked on for my accent (having kept my hand firmly down when they asked if there was anyone in from abroad) and kept my mouth firmly closed and lurked in the next-to-back row.

On the 45-minute drive back to the house, we passed a magnificent looking stag on the road, who just looked up at us and then calmly went back to eating grass, clearly not at all bothered by our presence. A magical sight on a bright moonlit night.

All too soon it was time to say goodbye to R and I, but I have a feeling we will get the chance to return their immense hospitality sometime in Portugal in the future.